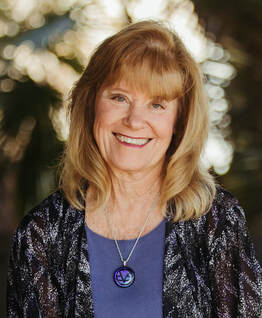 Raised as a Methodist she was active in the 1st Methodist church of El Cajon as a choir member and leader of the MYF. In 1972 she was introduced to Unity by her new mother-in-law of one year, Pauline Beauregard. Year after year, class after class, new experiences in attending Religious Science churches and classes, brought her to attend the Alpine church when her friend Rev. Toni LaMotta, began as minister. While performing Sunday platform duties and Children's Church coordinator, Gay took Practitioner classes, graduating to a licensed Practitioner in 1997. Ministerial classes through Emerson Institute finalized on July26, 2002 and in September of that year she began as Sr. minister of Alpine Center of New Thought while continuing to work full time as a commercial insurance agent. Rev. Gay has attended the ANTN conference each year to renew her spiritual nature and has attended other conferences and workshops as they become available. She is a certified Spiritual Prosperity Coach and in October 2012 was ordained as a Religious Science minister.

She continues the love of singing and is a past member of the Alpine Chorale and currently sings with the Martin Luther King Community Choir as a first soprano. Writing, speaking and singing all bring her abundant joy. She is known as a dynamic and inspirational speaker on any given Sunday you just might hear her burst into a song that flows up and through her. She invites you to come to our church~see and hear for yourself.

Sunday Services
Celebration Service: 11:00 AM
Alpine Church of Spiritual Living
2225 W. Victoria Drive
Alpine, CA  91901
619-552-3709
﻿Alpine Church of Spiritual Living An Independent New Thought Church that honors all paths to the One.
Empowering Lives by Being Unconditional Love & Joy in Action.
"The philosophy of Religious Science is nothing new to the world.  It is rather a synthesis of the greatest concepts that have ever come to the mind of humankind.  The laws of Moses, the love of Christ, the ethics of Buddha, the morals of Confucius and the deep spiritual realization of the Hindus all find an exalted place in the philosophy of Religious Science."
Ernest Holmes, Founder